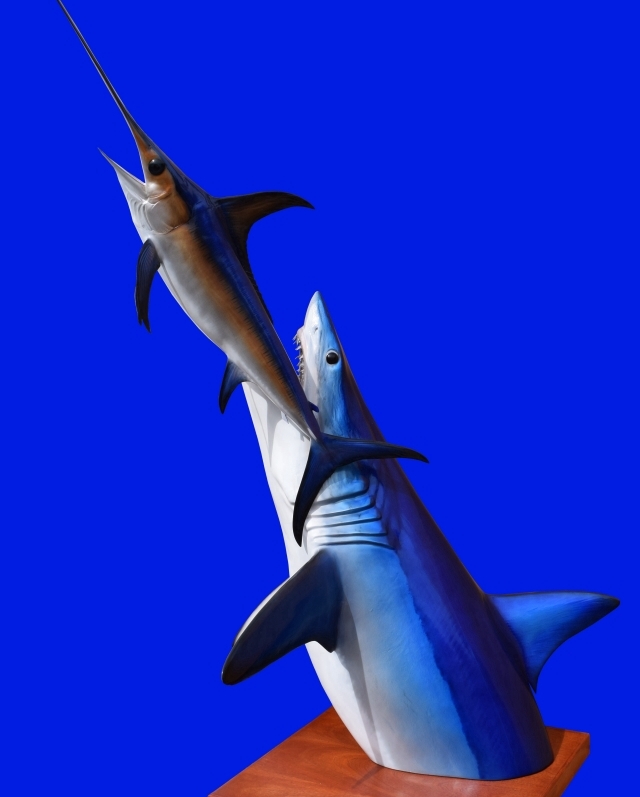 Mako Shark. The Mako Shark can be found worldwide in tropical and warm waters. These solitary, pelagic and fast swimming species rarely come in close to shore. Makos have a streamlined body and a pointed snout. The teeth are curved and point inward, making it easy to hold its captured prey. The Mako is a known predator and enemy of the broadbill swordfish, and can be found at times circling around a fresh swordie on the calm surface–after first removing the sword’s tail. Mako sharks have also been known to attack fishing boats, and are especially fond of outboard lower units. Mako sharks give live birth to their young. Information provided by The International Game Fish Association.

Mako Shark Mounts are available online from King Sailfish Mounts. You can even order online. KSM individually crafts each finely detailed mounted fish by hand, one-at-a-time. Every reproduction is airbrushed to resemble that species’ most vivid and striking color patterns. Initially formed to promote the release of local Atlantic sailfish, King Sailfish continues to be the leader in Marine Conservation–now offering all sizes and species of Saltwater Fish Mounts, including the Mako Shark.

Variety of Sizes Available: King Sailfish Mounts offers mounts of Mako Shark in a wide variety of different sizes. (scroll down for size/selection) The models displayed on this page represent recently produced mounts and/or most popular sizes. For additional selection, contact us by phone or by email for further details: Telephone: 954/784-8377 Email: or by email: kingsails@aol.com.

Complimentary Release Certificates – Available Online!
Go to our “Log-In-Your-Catch” page and enter your catch data in the required fields….then download, print and frame!

(For Details or To Order, Click on any Thumbnail Image)
Artist Note: Many of the Mako Shark Mounts shown here were painted according to a photograph provided by the angler. That explains the differences you might notice in the coloration of the various mounts.