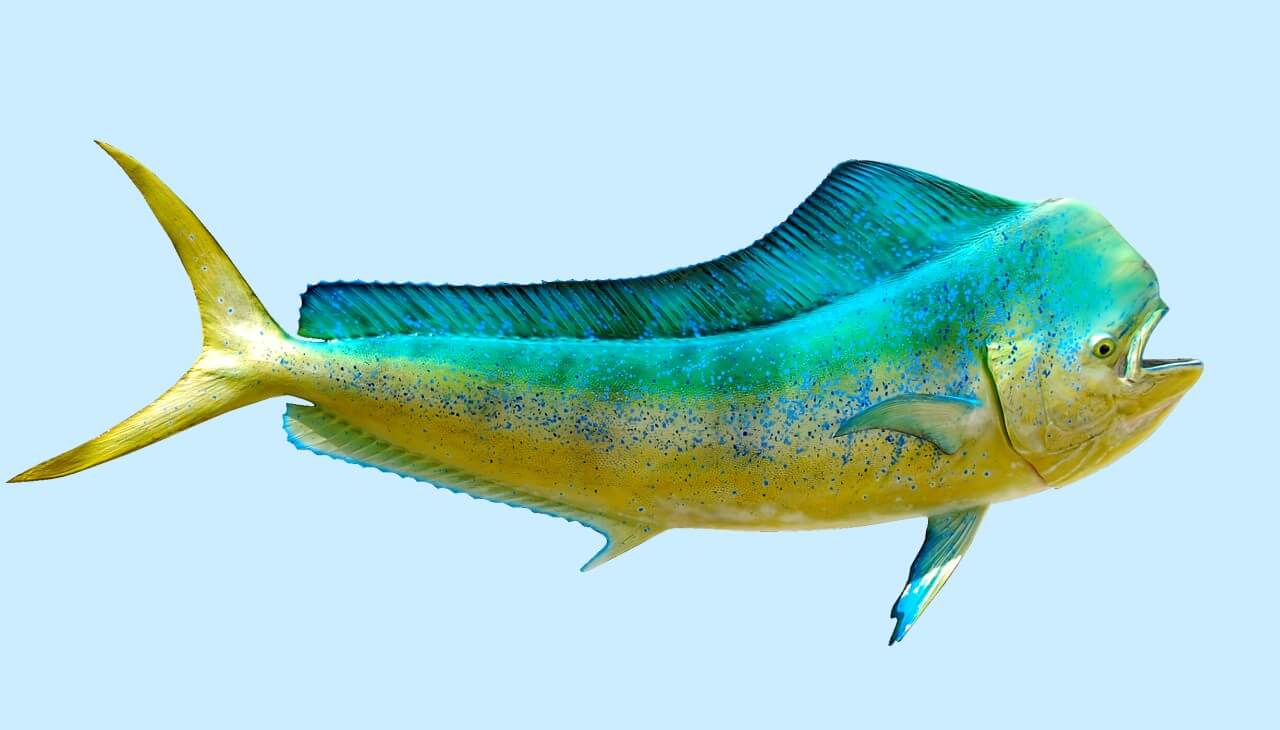 Bull Dolphin Mounts are now available online from King Sailfish Mounts. King Sailfish individually crafts each finely detailed mounted fish by hand, one-at-a-time. Every reproduction is airbrushed to resemble that species’ most vivid and striking color patterns. Initially formed to promote the release of local Atlantic sailfish, King Sailfish continues to be the leader in marine conservation–now offering all sizes and species of saltwater fish mounts, including the Bull Dolphin.

Dolphin. Iridescent blues, greens and yellows make the Bull Dolphin one of the most colorful game fish in the ocean! Found worldwide in tropical and warm temperate seas, the Dolphin is pelagic, schooling and migratory. The Dolphin is distinctive for its shape and color, and is often referred to as the most colorful fish in the sea. The name “Dolphin” is generally used by sportsmen to describe this fish in the Atlantic. In Latin America, this same fish is referred to as Dorado, and in the Pacific as Mahi Mahi.  The IGFA has recently published a listing of the 10 of the greatest Dolphin records of all time!

Bull Dolphin vs. Cow Dolphin. The Bull Dolphin (male) has a blunt forehead while the cow’s head is more rounded. Although the colors can vary and change often, the spots on the Bull are generally grouped together in clusters where the spots are scattered more at random on the Cow.

The Dolphin is highly rated as a game fish and for its food value. It is often referred to as dolphinfish, to distinguish it from the dolphin of the porpoise family, which is a mammal and not related in any way to the game fish.

Coloration. From yellows to greens to blues, no other game fish in the ocean can be as bright and colorful; or can change colors so dramatically and instantly. It is also interesting to note is that their colors appear different when viewed from above and below the water. In their green/yellow color phase, the spots on the dorsal and near the eye are neon blue….almost glowing. In the blue color phase, the entire fish is shimmering with iridescent hues. If you prefer the blue color phase or have images for our artists to use, please indicate this information in the “Comments” section when placing your order online.

Variety of Sizes Available: King Sailfish Mounts offers mounts of Bull Dolphin in a wide variety of different sizes. (scroll down for size/selection) The models displayed on this page represent recently produced mounts and/or most popular sizes. For additional selection, contact us by phone or by email for further details: Telephone: 954/784-8377 Email: or by email: kingsails@aol.com.

Go to our “Log-In-Your-Catch” page and enter your catch data in the required fields…..then download, print and frame!

(Artist Note:  Many of the Bull Dolphin found below were painted according to a reference photo provided by the angler.  This explains the difference in coloration in the various mounts.)

(for details or to order any size below, click on the thumbnail image)