Broadbill Swordfish are found worldwide in temperate tropical oceanic and continental shelf waters from the surface to depths of 2,000-feet or more. Swordfish have smooth broad and flattened bills that are significantly longer and wider than the bill of any other billfish. It also has a rigid dorsal and pectoral fins and a very large keel on either side of the body just before the tail. Swordfish often slash their prey using their bill with spring-loaded lightning speed. This pelagic, migratory fish travels alone when mature, but travels in small groups as juveniles.

The I.G.F.A. World Record Swordfish weighed 1,182-pounds and was landed by Louis Marron in 1953 off Chile while trolling bonito. The restored mount which is on display at the International Game Fish Association Hall of Fame and Museum in Dania Beach, Florida (greater Fort Lauderdale) sports deep scars on the original bill, which was also broken at some point in the fish’s life.

During the restoration, we had to remove a thick layer of plaster from the fish, which has covered the mount for decades. The bill, which had been broken off near the tip, initially indicated that this particular sword was likely quite aggressive. When the plaster layer was removed from the bill, we noticed a series of deep scars on both sides of the bill, which confirmed how aggressive the fish actually must have been. What was most interesting, though, was the fact that most of the scarring had occurred on the right side of the bill. Did this indicate that it was a right-handed fish? Perhaps so.  (more on the IGFA World Record Swordfish)

Swordfish Mounts are available online from King Sailfish Mounts. You can even order online. KSM individually crafts each finely detailed mounted fish by hand, one-at-a-time. Every reproduction is airbrushed to resemble that species’ most vivid and striking color patterns. Initially formed to promote the release of local Atlantic sailfish, King Sailfish continues to be the leader in Marine Conservation–now offering all sizes and species of Saltwater Fish Mounts, including the Swordfish. 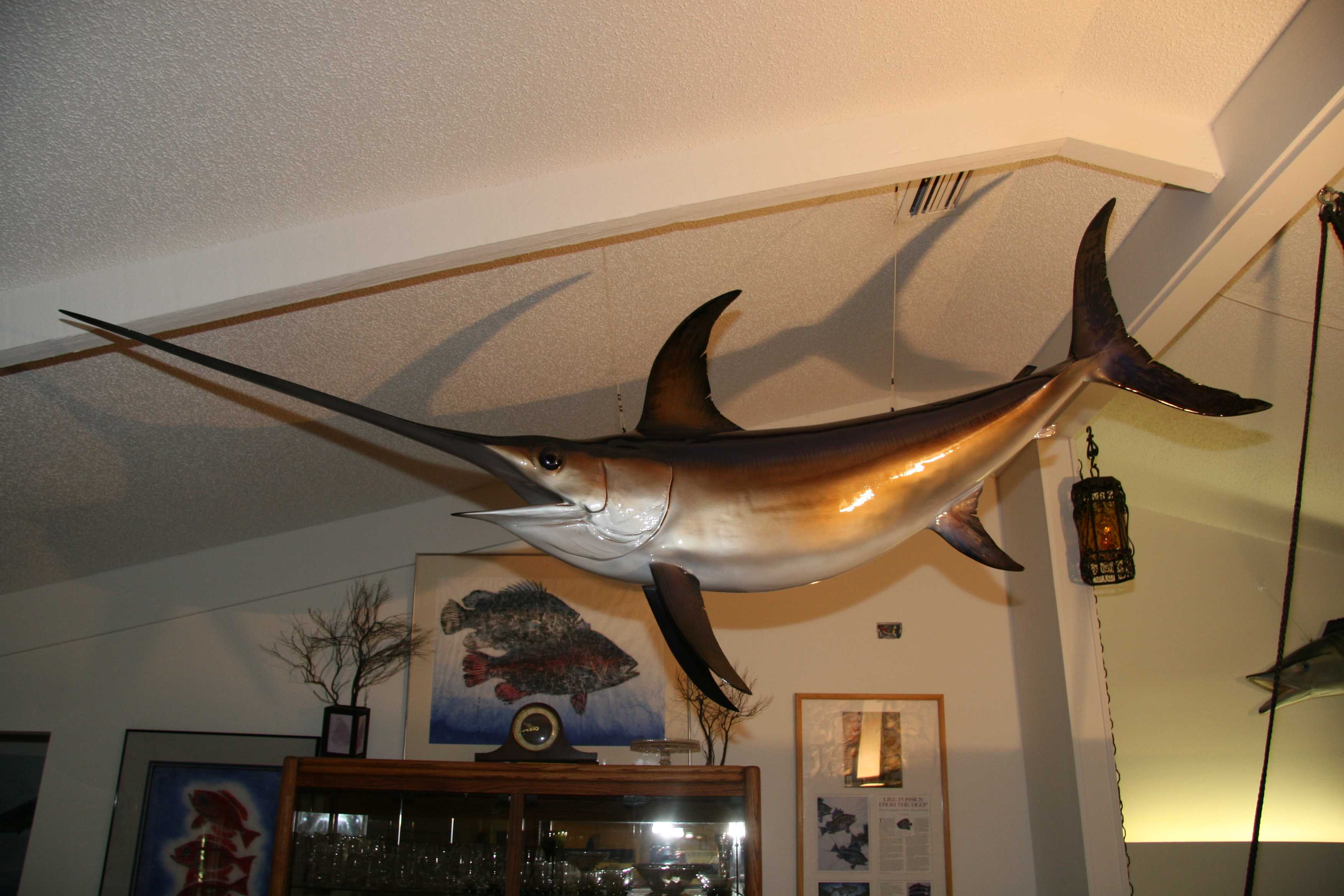 Variety of Sizes Available: King Sailfish Mounts offers mounts of Swordfish in a wide variety of different sizes. (scroll down for size/selection) The models displayed on this page represent recently produced mounts and/or most popular sizes. For additional selection, contact us by phone or by email for further details: Telephone: 954/784-8377 Email: or by email: kingsails@aol.com.

Coloration. Due to popular demand, we have developed two different color patterns for swordfish. The “Daytime” version was developed, in part, by George Poveromo along with input from other anglers who have commented that swordfish appear totally different in the daylight. Our “Nighttime” broadbill colors resemble images of those taken after dark. Indicate your preference in the “comments” section of the shopping cart when placing your order.

Testimonial: Mariemma Diaz, Ponce, PR: “You did a great job. It looks the same as if it were alive. Your box was very secure!” (Swordfish, Broadbill)
Swordfish Replicas by King Sailfish Mounts….setting The Standard for Excellence.

Artist Note: Many of the Swordfish Mounts shown here were painted according to a photograph provided by the angler. That explains the differences you might notice in the coloration of the various mounts.
(For Details or To Order, Click on any Thumbnail Image)