The Molding of the World Record Escolar.

At around 9am I received a phone call from Dr. Guy Harvey in the Cayman Islands. He said, “Doug, Charles has broken the I.G.F.A. World Record with a 150.2-pound Escolar. Can you come down right way? The Cayman Islands Fishing Club has the fish and we’d like for you to make a mold…”
Sure enough, Charles Ebanks had smashed the old record, which I recall was around 80-something pounds. Here are some shots of the fish being re-weighed just after I arrived that afternoon. 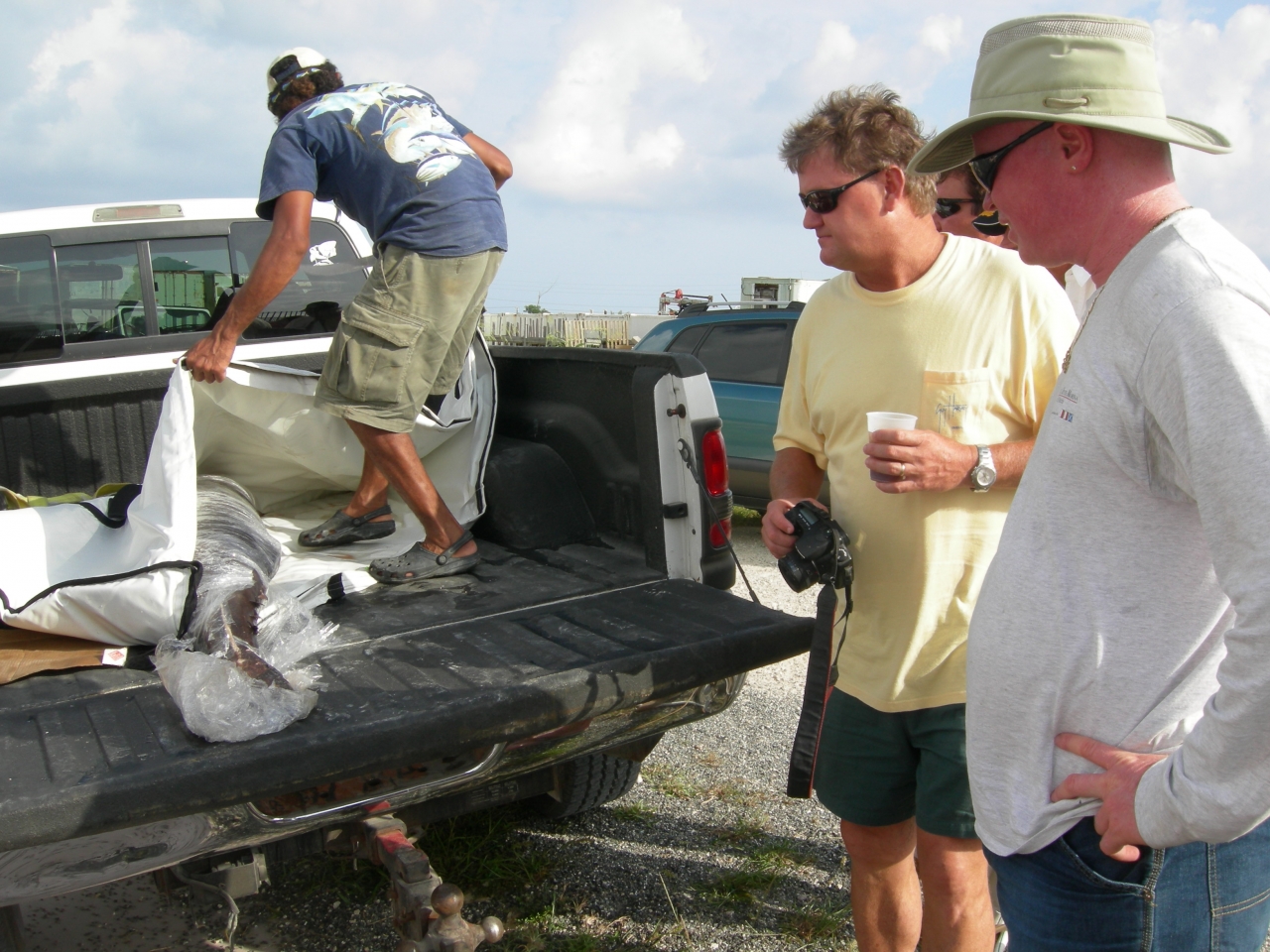 Charles Ebanks, preparing to weigh the new World Record Escolar later that afternoon. Present were officials from The Cayman Islands Fishing Club and an I.G.F.A. Representative. 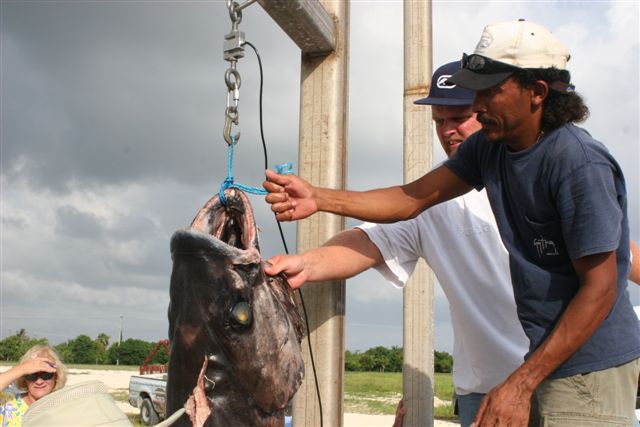 An Official Scale had been set up and tested for accuracy. However, there would be no uncertainty, since it was nearly twice the size of the previous World Record. 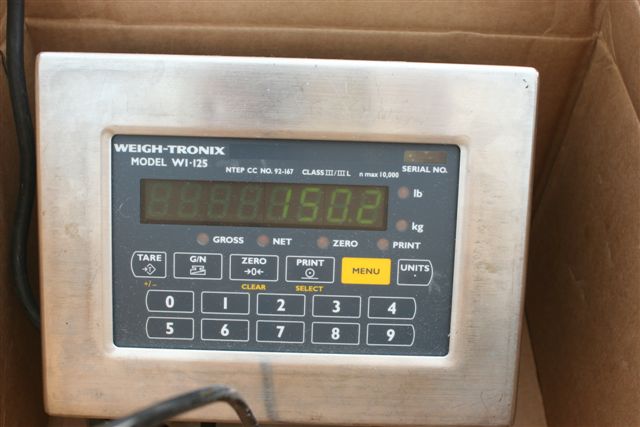 The official weight came in at 150.2 pounds, smashing the previous world record. Charles Ebanks is quite well known in the Cayman Islands. He was, back then, and probably still is quite the “ladies-man”. His family has fished Cayman waters for generations. I expect that his ancestors may have been Caribbean pirates or something. Legendary people. 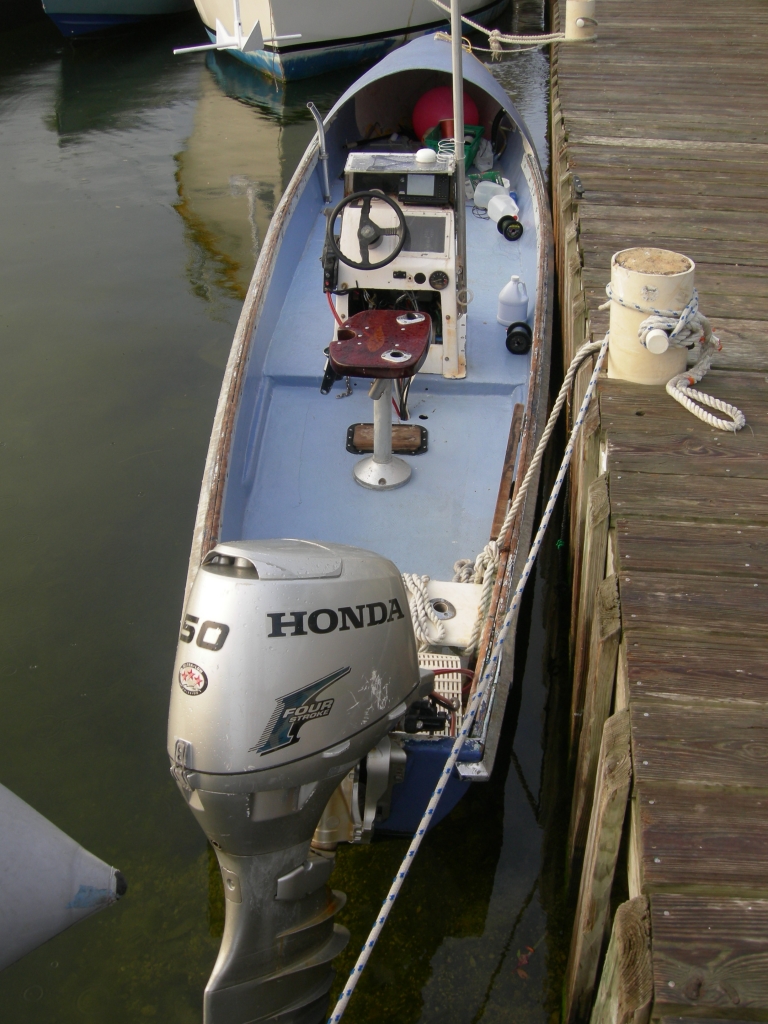 I don’t know if you can imagine fishing 20+ miles from shore and catching broadbill swordfish at night in 3,000 feet of water….solo…. in this boat. But that is what it was all about.
How I recall his story: On this particular evening, he was fishing for swords in the usual manner. At around 2 am something took his bait 300 feet below the boat, but he missed the strike. He reeled in the bait and found it partially eaten. Since it was his last bait, he decided to the 2-pound mackerel back down. While he was freelining, it was eaten on the drop. This time it was a soft hit and he actually wasn’t sure that he had a fish on…..until the line came tight. Although escolars have been taken in surrounding areas, it was surprising to see what was on the end of his line…..not to mention the size! 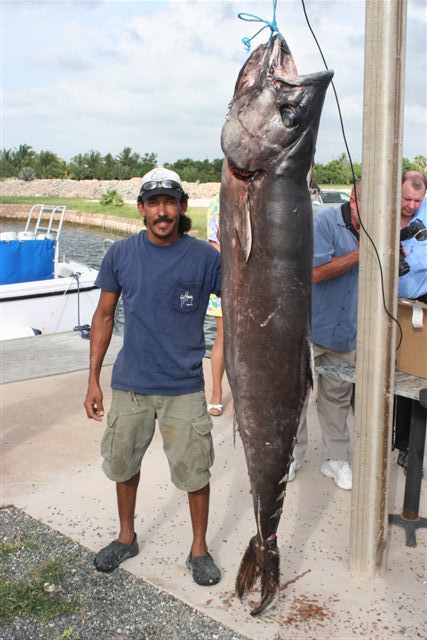 Molding. So for us, now the fun began. With little time to prepare, I had no supplies other than a bag of what is called “Hi Fiber”, which is used for building a mold shelf around the fish. I was really afraid going thru Customs, since it’s packed in a clear plastic bag and likely resembled a brick of cocaine.
There was a full service marina close by and we were able to get permission to work after-hours in one of their shops. They had all of the necessary materials, which was very cool. Charles and the marina owner’s son Steve (I think) volunteered to assist. They had no idea about how long it might take!!
We started to position the fish around dark. Of course the fish was still cold so we scrounged around to find a hot air gun and then proceeded to take turns warming the fish. It wasn’t until around 11pm that it we had removed all of the coldness. When the fish is cold, it “sweats” like a glass of ice water. The resulting moisture can prevent the gel coat from picking up the impression from the surface of the fish. Or even worse….. 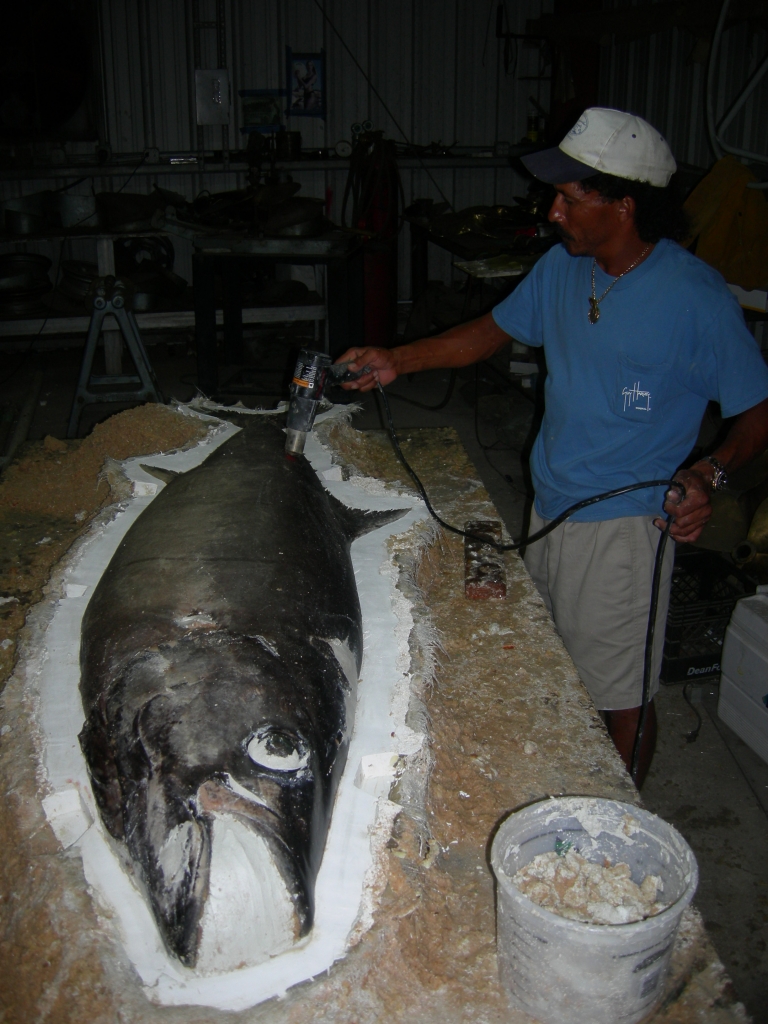 (above: actually drying the fish before doing the second side…..but you get the general idea…..they had no clue that we would be there all night….and I still didn’t tell them!)
At around midnight, it started to rain. Of course the gel coat that we had just applied didn’t seem to like the sudden rise in humidity. So again we had to take turns with the hot air gun. Luckily we had plenty of cold refreshments. It was damp and miserable and late, but I was hanging with cool dudes things were going well. By 3 am we had finished glassing the first side of the mold. 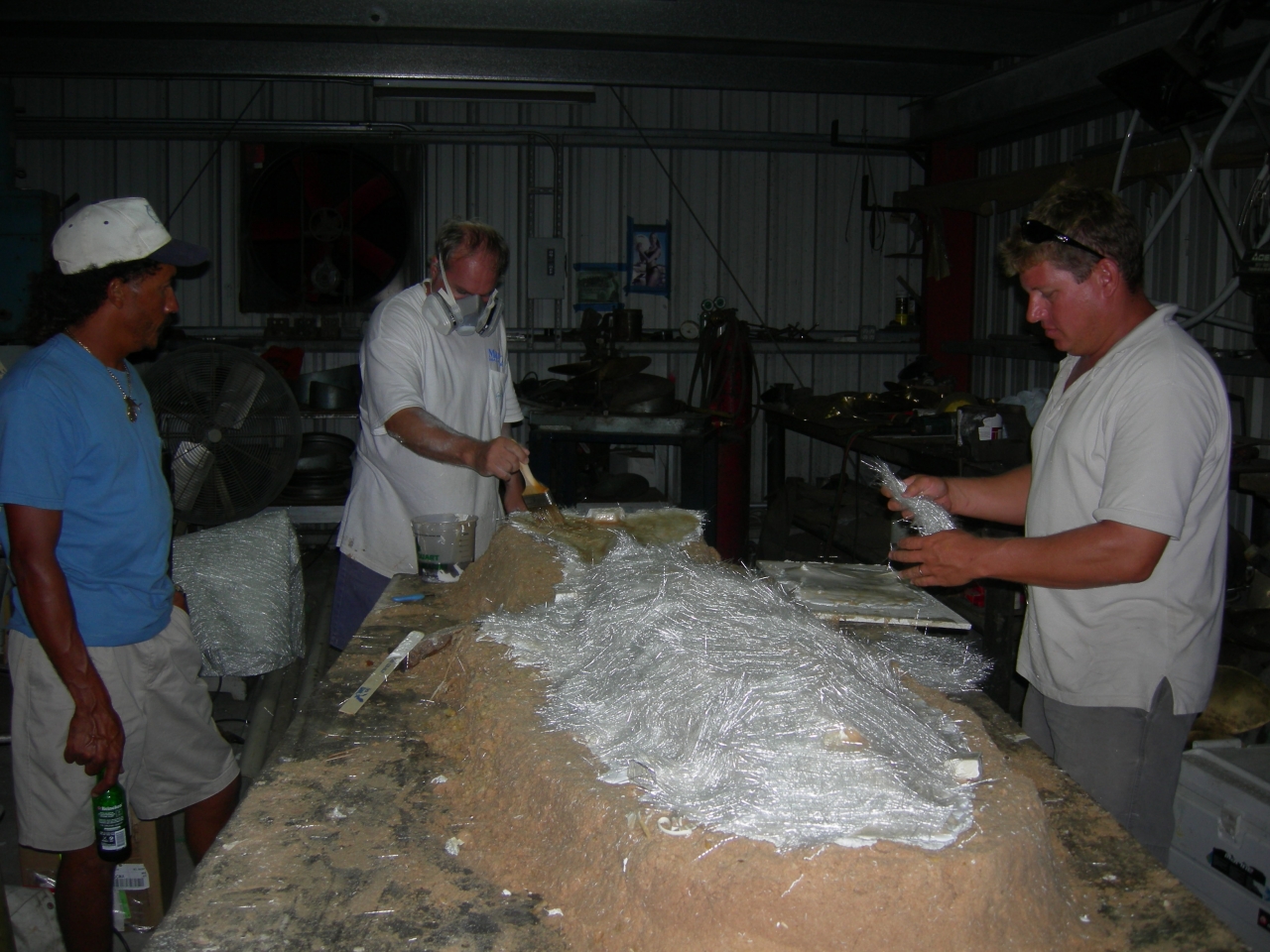 In a desolate boatyard at 3-in-the-morning things get quiet and peaceful. Thought processes diminish and your mind and body go into auto-pilot. There is no more talking. The sounds of crickets and frogs were definitely taking over. But the mission remained. No one mentioned it as were glassing the second half of the mold, but all 3 of us were wondering about how the mold would turn out. Would the impression be there, or would the resin have eaten through the gel coat and ruined our chances of molding this amazing world record fish? We started hearing the faint sounds of birds…..then roosters…..it was time to open the mold. The anticipation was difficult to bear. 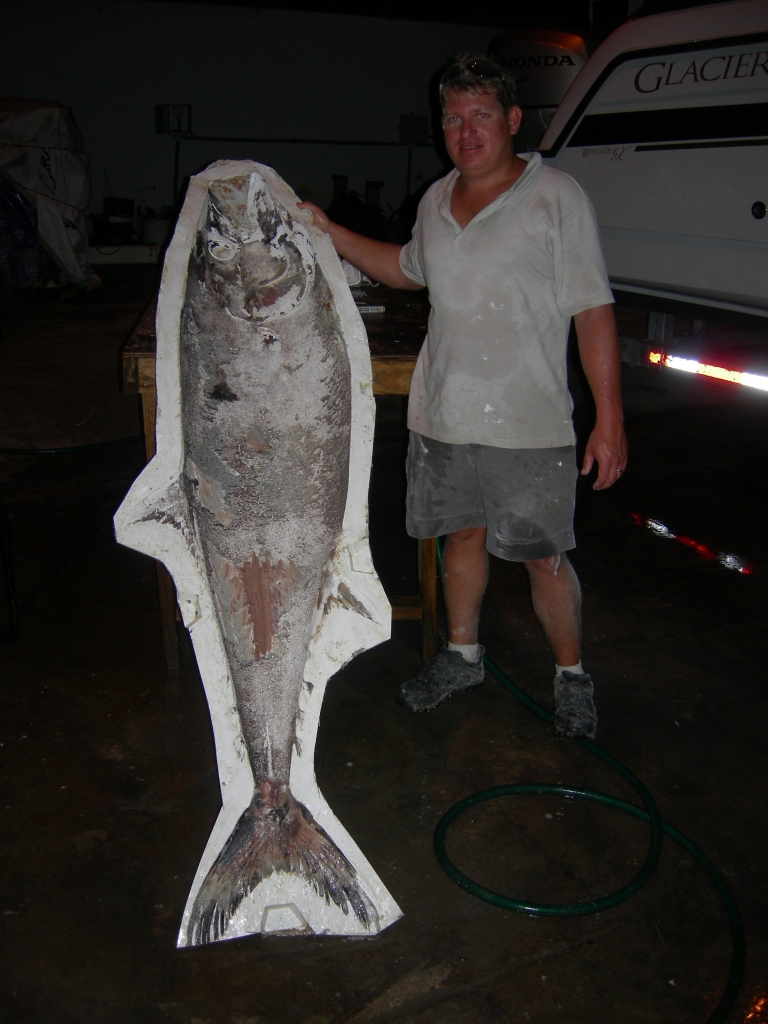 But finally we were rewarded with the good news: A perfect double sided mold! 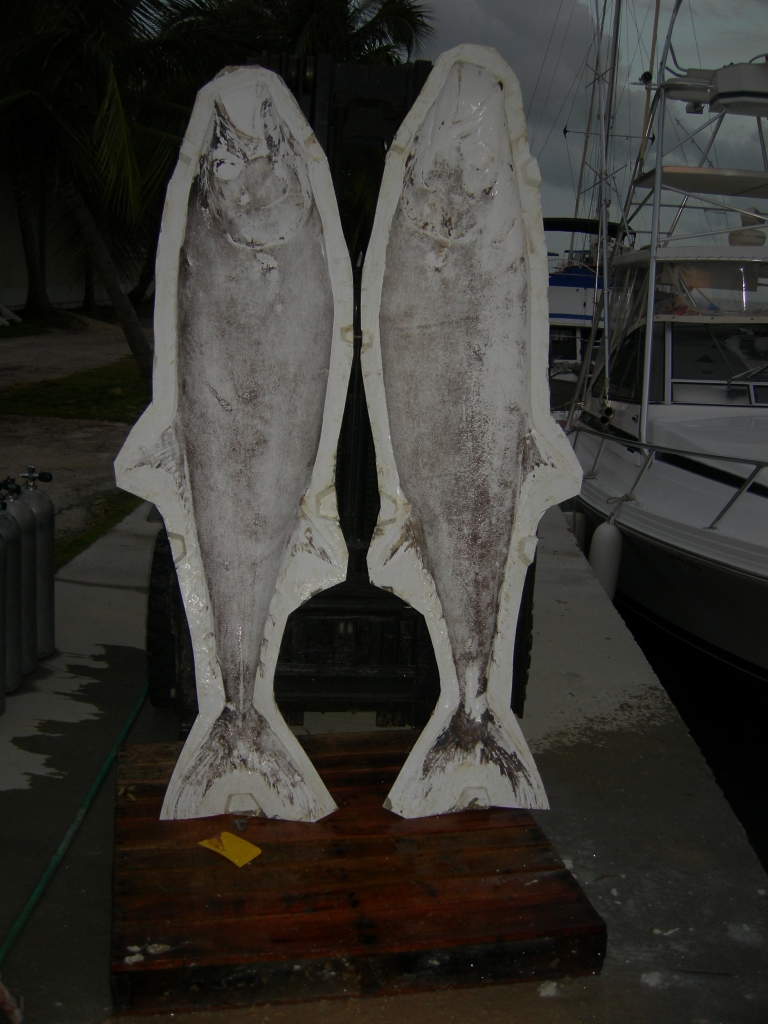 Thanks to everyone involved! A mount of this World Record Escolar is now proudly on exhibit at the International Game Fish Association Hall of Fame and Museum in Fort Lauderdale, Florida.